The Carlo Collodi National Foundation is a non-profit organization. Since 1962, it has promoted the culture of and for children starting with the international literary masterpiece The Adventures of Pinocchio. Thanks to its artistic and human values, but most of all to its beloved protagonist, Pinocchio, this book is an extraordinarily effective tool for raising awareness in children and adults of the most diverse themes, inspiring enthusiasm and a positive attitude towards quality educational and recreational programs.

The Committee for a Monument to Pinocchio founded the Collodi Foundation. It had promoted and built the original part of Pinocchio Park as well as launched other cultural initiatives that were inherited and continued by the Collodi Foundation: the collection of Collodian editions, the study of Carlo Lorenzini/Collodi’s life and works, writing and illustration competitions for children's books, and school competitions. The choice to continue working in the field of culture and cultural tourism, together with Pinocchio Park’s success and various initiatives, led to the establishment of the Carlo Collodi National Foundation in 1962, recognized by Decree of the President of the Republic no. 1313 of 18 July 1962. 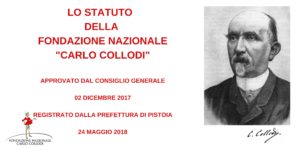 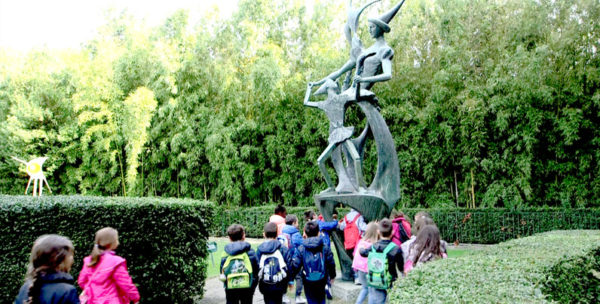 Ø  oversees the historical Garzoni Garden–National Monument - and the Collodi Butterfly House–Casa delle Farfalle where it handles educational and cultural activities;

Ø  acquired and restored Villa Arcangeli in Collodi, as its headquarters. It carries out institutional business and cultural planning, and is also the seat for the following:

- the Collodian Library, which has participated in the SBN – National Library System since 2014.

Ø  looks after the recognition, promotion, organization, and management of activities related to orientation, training and critical thinking, teaching and research in addition to  continuing education, training, re-training, specialization, and refresher initiatives related to emerging needs in the fields of education, child and youth culture, school, literature, the arts, and other cultural sectors;

Ø  disseminates and develops childhood and adolescence learning through the work of parents, teachers, educators, social and communication workers, working together with organizations, agencies, associations, and Italian and international public and private foundations, private and public companies;

Ø  promotes projects and actions aimed at ensuring the protection of the rights of children and families, also enhancing projects supportive of families within Italy, also in connection with similar situations in Europe and the world;

Ø implements interdisciplinary and international research programs that ensure progressive development of knowledge on lifestyles and learning, on the professional, cultural, and civic training of adolescents and young people, on national, European, and international policies that concern them and also allow continuous progress in the disciplinary research of the sciences and skills that they are dealing with;

The wide cultural and pragmatic appeal of the FNCC’s work is expressed daily via international exhibitions, events, and festivals. Among the most recent are:

o Seoul Museum of History in collaboration with the local Italian Cultural Institute (2017),

Palazzo di Giano in Pistoia and in Soave (2017-2018);
Pinocchio Street Festival in Collodi (since 2016);
Pinocchio at the Opera – Pinocchio’s Birthday 2018; and
art and illustration exhibitions, books, and photography in the Pinocchio Park Museum.
The FNCC’s mission is to promote in Italy and around the world culture of and for children in all the social dimensions in which they participate and where they have the right to be integrated according to methods appropriate to their needs, skill level, sensitivity, expression, and development.

Its vision is to make Collodi the city of children, i.e., a symbolic place, model, and laboratory of how a community can be structured using children’s needs as a guide, and make it the European capital of childhood, in the "European Fairy-tale Route" cultural itinerary.

With the contribution of the foremost contemporary architects, the foundation has thus designed the Collodi Pinocchio Polycentric Park to carry out a positive institutional process with the Presidency of the Council of Ministers, Mibact, Miur, Mef, MIT, the Tuscany Region, local authorities, and Invitalia.

The foundation will shortly expand Pinocchio Park, first with a new Land of Toys and immediately after with the Pinocchio Educational Farm

To strengthen the cultural partnership with Florence and re-introduce a Florence-Collodi tourist route, the foundation will create the Pinocchio Museum Experience in the heart of the Tuscan capital in 2018.

Internationally, Pinocchio is found in the cultural knowledge of countries the world over, and the institution’s commitment facilitates establishing cooperative relationships for significant, often long-term research and dissemination. Since 2007, this organization has also undertaken European planning to participate in calls for bids in the culture and education sector. In fact, project proposals for educating children and adults have been approved, in which Pinocchio and literature are the engines for the intercultural dialogue and intergenerational encounters for a new learning approach in basic education, and a wide dissemination of sensitivity and novel lifestyles and themes for sustainable development and a carbon-neutral society. The Collodi Foundation currently partners with ERASMUS + projects: META-Minorities Education through Art; ARTinED online-A New Approach to Education Using the Arts; T&D-Theater and Digital Stories; MOVEUP-Early Childhood Education building sustainable motivation and value paradigm for life; and Pinocchio Joins the Orchestra.

The FNCC began publishing in the 1960s with monographs. It carried on with conference proceedings up to the Critical Edition and a commemorative book for Pinocchio’s 100th anniversary, with woodcut illustrations by S. Bartolini. They have continued to publish up until today, with the series “Le api industriose” (“Industrious bees”).

The foundation then promoted the national edition of Carlo Lorenzini/Collodi’s works (established in 2009), highlighting the author's multifaceted figure. Intellectual and cultural, he was not merely a children's author or a "one-hit wonder". Four of the 14 books planned have already been published and contain contributions from Andrea Camilleri, Guido Conti, Ernesto Ferrero, Michèle Merger, and Mario Vargas Llosa. 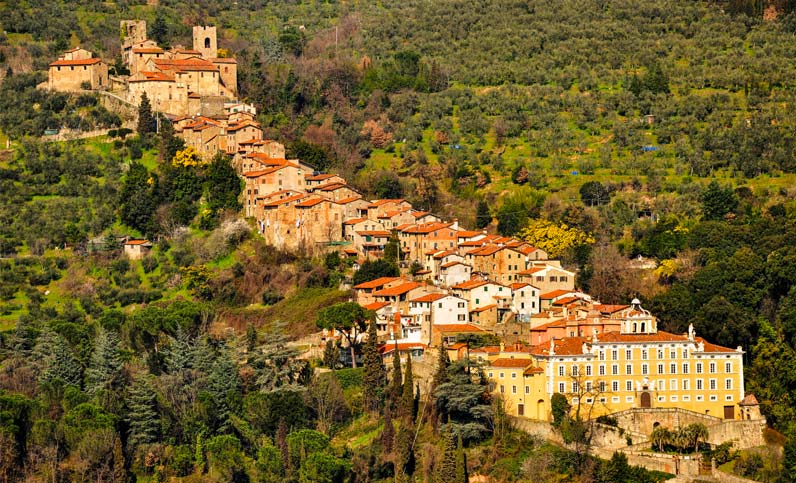 Collodi is the ancient medieval village in Tuscany made famous worldwide by the author of The Adventures of Pinocchio, the best known, most popular non-religious book ever 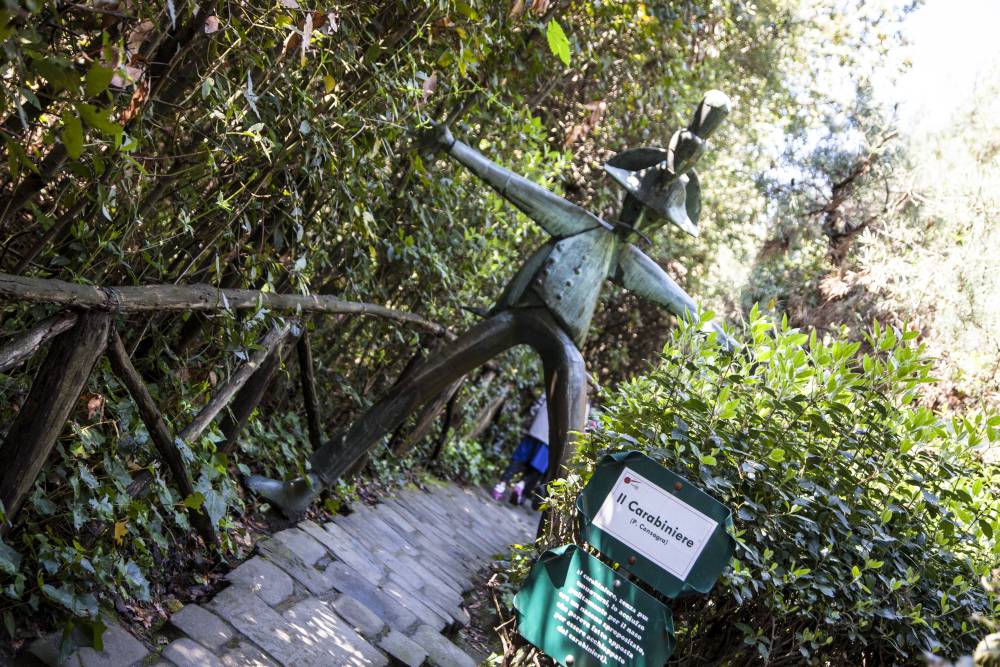 A fairy-tale park
Surrounded by Pinocchio Park’s art, architecture, and greenery, you can relive the emotions and events of the most beloved and best-known Italian book in the world. 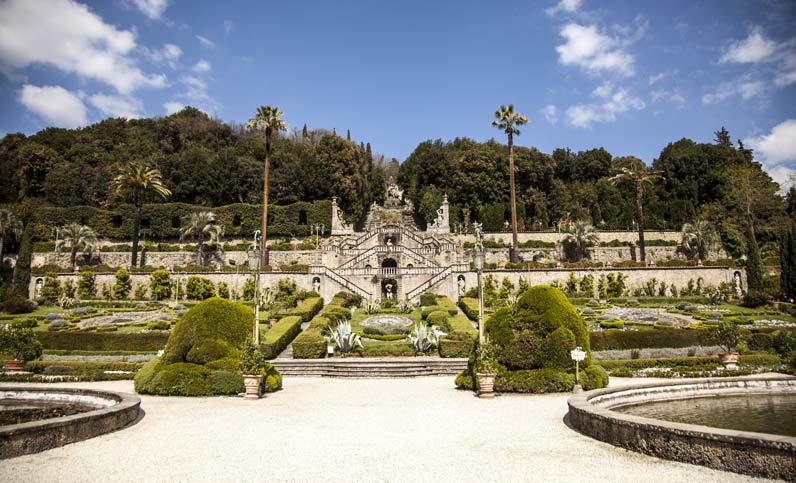 An 18th-century delight
The majestic Garzoni Garden is among the most beautiful and best-preserved in all of Europe. Getting lost in the wonders of this fantastic place make for an unforgettable experience